Numbers have always intrigued me, whether in mathematics, on calendar pages, or even in game puzzles. So, when I noticed a video thumbnail on YouTube two years ago about a sudoku puzzle with only two given digits, naturally, I was curious. I clicked on it and watched the 25-minute video on a channel called Cracking the Cryptic, and that’s when a new world of numbers opened up to me.

Most people have probably seen a sudoku puzzle in newspapers and magazines. The classic form consists of a 9 x 9 grid of 81 square cells divided into nine 3 x 3 boxes. Each row, column, and box of the grid must contain the digits 1 to 9. There are always many given digits to start, with a minimum of 17 needed for a solution to exist. 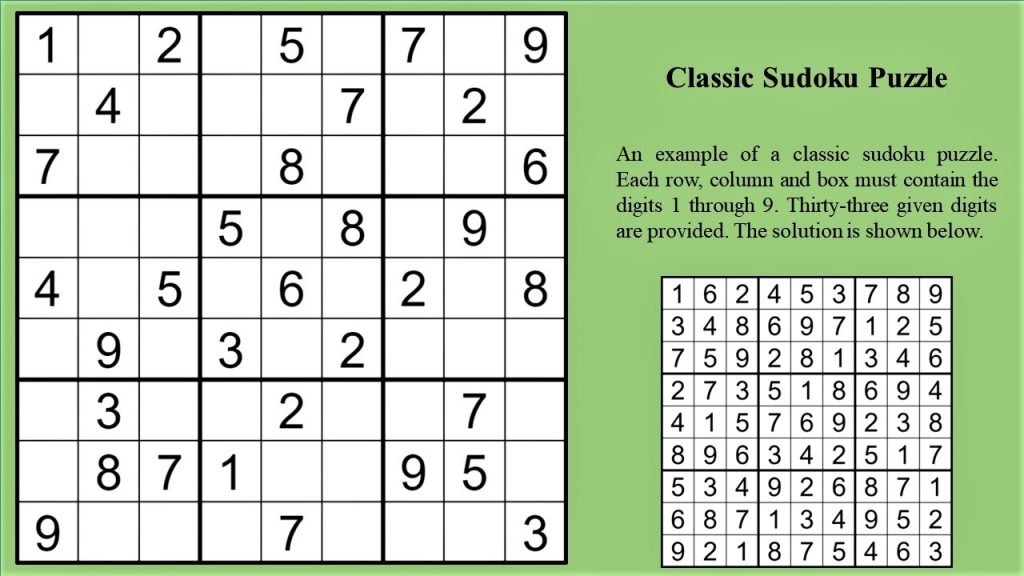 When I watched the video in 2020, named “The Miracle” by Mitchell Lee (https://www.youtube.com/watch?v=yKf9aUIxdb4), there were only two given digits on the grid. But how could that be possible, being fifteen digits shy of the minimum? Well, welcome to the world of variant sudoku.

Using different constraints, puzzle creators can limit, or eliminate entirely, the need for given digits. These constraints include arrows (where digits along an arrow must add up to the number in the connecting circle or pill), thermometers (where digits must increase from the bulb end to the tip), knight’s move (where cells that are a knight’s move apart, as in chess, cannot contain the same digit) and killer cages (where digits in a cage must add up to the indicated number without repeats). There are numerous other constraints too, with new ones being invented all the time. 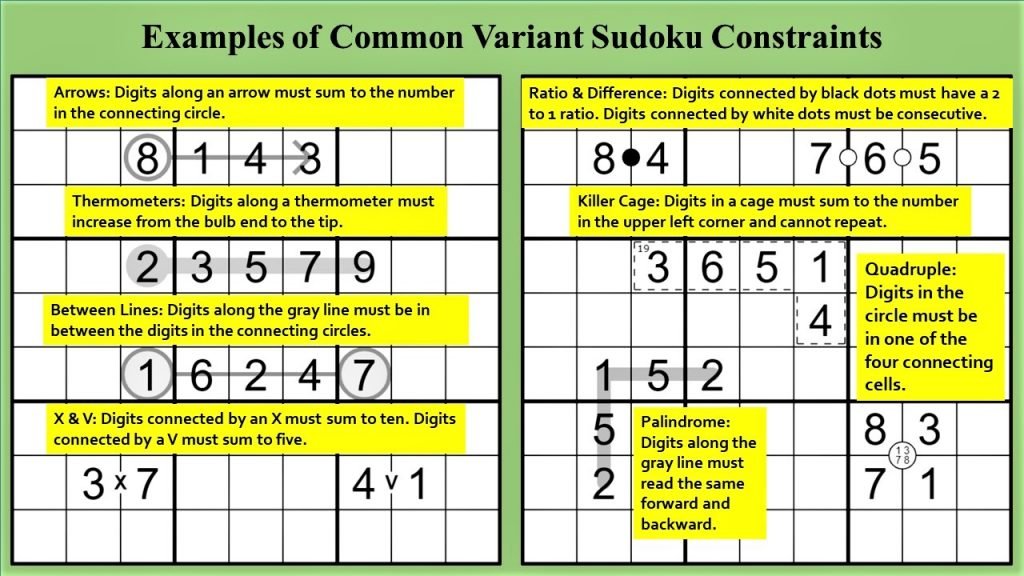 The Miracle video was amazing to watch. Simon Anthony, one of the two men who created Cracking the Cryptic, presented a stunning solution to the puzzle. Simon, along with Mark Goodliffe, the second solver (who both were able to quit their jobs because of the channel’s success), each currently offers one puzzle to solve on Cracking the Cryptic every day of the year. Their channel often referred to as CTC, is based in the UK and has nearly a half-million subscribers, and is growing daily. In addition to watching the videos, viewers are invited to solve the puzzles on their own by clicking on a link in the description field below each video.

After watching “The Miracle” and being awed by Simon’s solve and Mitchell Lee’s genius in creating such a numerical masterpiece, I checked out several other videos on the channel. Then, after viewing Simon’s solving of Dutch puzzle setter Aad Van Der Wetering’s “Pi Sudoku” (How Can This Sudoku Exist?), which uses the first 21 digits of pi, I began to wonder if I could create a simple variant puzzle on my own. As I had zero experience in this field, I thought the best way to go about it was to jump right into the task, so that’s just what I did.

Through trial and error, using paper, pencil and much erasing, and being inspired by the Miracle and Pi Sudokus, I finally created what turned out to be a simple arrow sudoku using the first eleven numbers in the Fibonacci sequence (1, 1, 2, 3, 5, 8, 13, 21, 34, 55 and 89), where one term is the sum of the two numbers before it.

Learning that CTC will look at puzzles sent in from the public, (requiring a one-month waiting period between submissions), I tested mine several times to make sure it worked properly before emailing the puzzle and the solution to them. CTC’s own testers will look at submissions before recommending any for the channel. And though I continue to test puzzles on paper, I also design, test, and format them for submission on a cool website by Eric Fox at f-puzzles (Sudoku Setter) which offers a variety of sudoku variants to incorporate into your puzzle construction.

To my surprise, my sudoku puzzle was featured on their channel about two weeks later in May of 2020. Since then, seven additional puzzles of mine have been solved on the channel, the more recent ones presented under the name Walking Writer, the name of my own YouTube channel. The last two were titled Stitches and Squarrows. 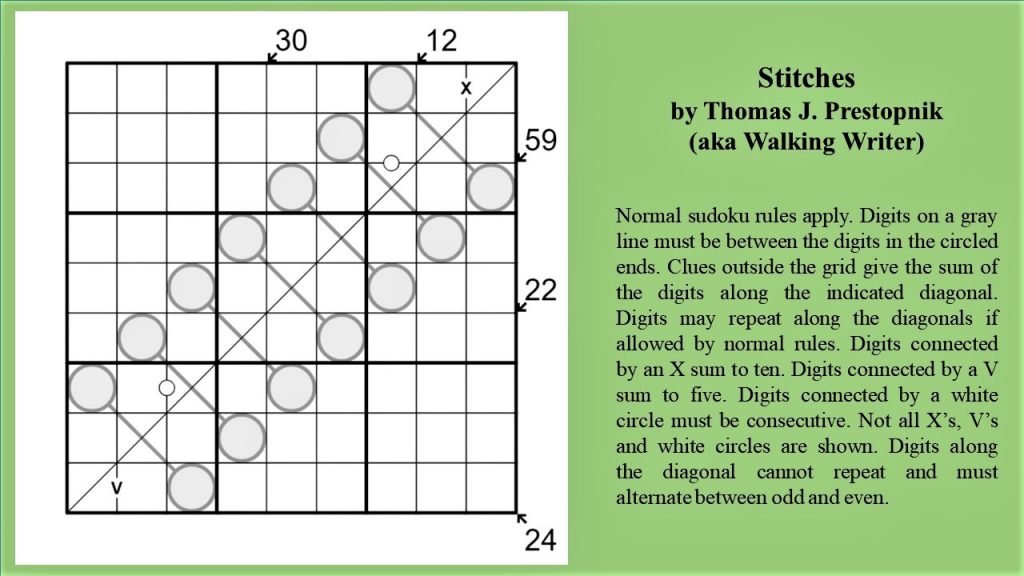 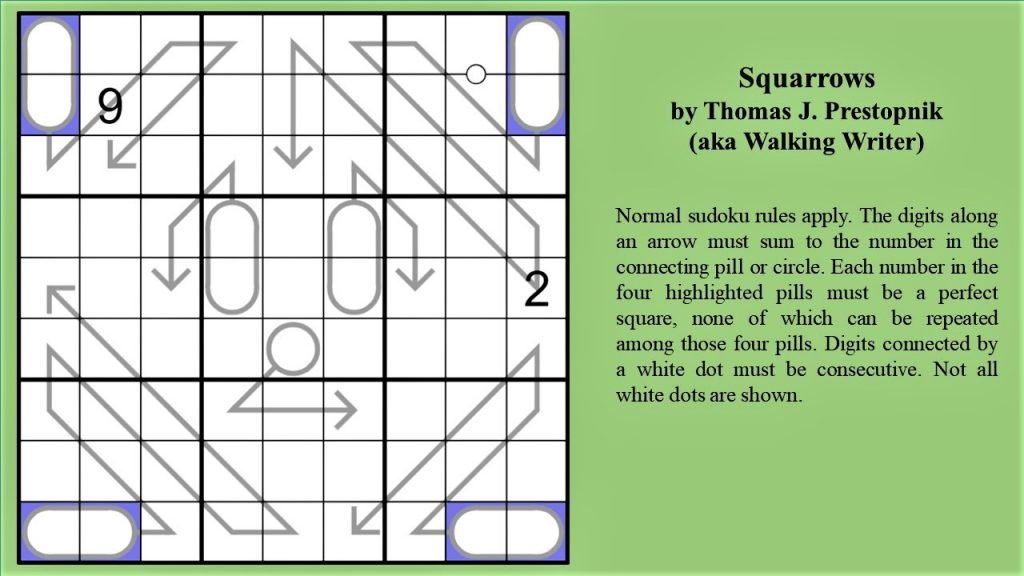 I’ve solved a few of the puzzles shown on their channel as well, but I find that I’m a better puzzle constructor than a puzzle solver. Many of the CTC puzzles can be quite difficult to complete, though they try to sprinkle in some easier ones every now and then.

If you’re inspired by number puzzles and might have the urge to create a variant sudoku of your own, watch a few of their videos (https://www.youtube.com/c/CrackingTheCryptic/featured) and check out the submission guidelines posted on CTC’s community page. After that, the sky’s the limit as to what ideas one might come up with for a sudoku puzzle. But whether watching or creating, as they often say on their channel: Let’s get cracking!

View the Stitches and Squarrows puzzles on Cracking the Cryptic using the links below.

This’ll have you in Stitches (Stitches)

The Tears of a Clown (Squarrows)

View a full list of my puzzles in the description box under this video using the link below.