Marc Verri and his son Nathan, work on the mural on Main Street as part of Think Local’s virtual Art Walk month.

Marc Verri and his son Nathan, got to work on the next panel that they’re adding to the felt mural that is on Main Street, just north of the Price Chopper. He says that he brought Nathan along because he has the most energy between the two of them.

He started the project two years ago by completing two panels and then completed a third panel last year. “This is our third year of doing this. The first year that we did this was kind of an experiment to see how long it would last. We thought maybe a week or so, but it lasted through the first rainfall, and then the entire winter.”

“It’s become a thing which brightens up Main Street. Last year when we did it, we refreshed a part of what had been done in year one, and today we’re going to check it again. It’s amazing how it just holds up. You can tell when the new fabric is next to the old that there is a little fading, but driving by you don’t notice it,” he said.

He says that Jessica Kelly had seen a similar project online somewhere and convinced him that he should try it here. “In most of those instances, people just made geometric shapes, following the lines in the fencing. I thought we’d try a picture since it was supposed to be an experiment anyway.”

He says that after finishing the first section, they stepped across the street to look at it and it looked like a mosaic.

This year the section that they’re adding is a night scene so that when you’re driving down the street and looking at it, it will go from night to daylight. “It’s an on-going project, an experiment. Though at some point, we’re going to have to get a waterfall in it,” he said.

Verri has been involved in several other projects this year, including the making of t-shirts for Think Local that went on sale this month, and the writing of another book with his son. 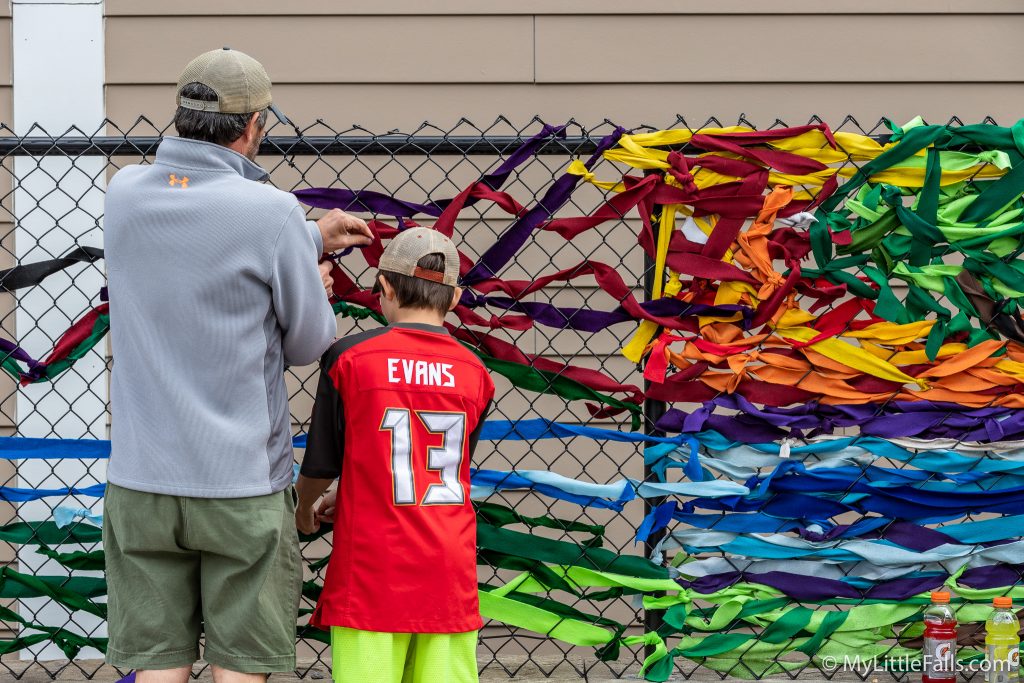 Photo by Dave Warner – Marc Verri and his son Nathan work on the fourth panel of their felt mural displayed on Main Street.