Where I Wander – Aerial Delights

Story and Photographs by Joan Herrmann 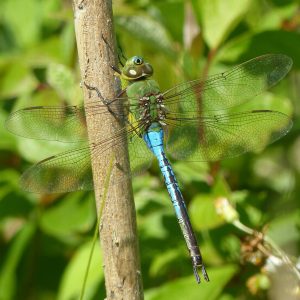 Whereiwander… The last week of May is usually the beginning of the emergence of one of the first species of Dragonflies of the new year. For us in the Northeast that week may welcome the Dot-tailed Whiteface Skimmer followed by at least six more Skimmer (pond-dwelling) species. For this photographer and “Odie” (enthusiast of the order of Odonata), it is time to go “flying” (looking for dragonflies and damselflies). About three hundred and twenty-six species of dragonflies may be found in North American and about one hundred species may be found in our area. However since the male and female dragonflies do not resemble each other in coloring or markings means, we may be able to find as many as two hundred, different in appearance, dragonflies.

Many people appreciate these “toothy ones” of the order of Odonata. The name is derived from the lower lip (labium) which is used to hold prey while the mandibles do the chewing. Dragonflies are especially appreciated, in early spring, for the number of black flies and mosquitoes which they consume. Dragonflies sometimes adorn our jewelry, clothing, or a multitude of home décor. Finding and photographing dragonflies is becoming as popular as birding, but it has an advantage in that you do not have to get up as early in the morning. Dragonflies need warmth in order to achieve activity. Learning about dragonfly habits and habitat is especially important if you want to find different species. 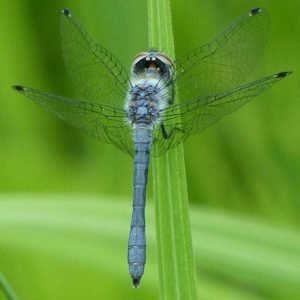 Both dragonflies and damselflies are members of the order of Odonata but are separated into two suborders. Dragonflies belong to the suborder Anisoptera which means “different wings”, their hindwings are larger and shaped differently from their forewings. Damselflies are the suborder Zygoptera meaning “same wings”, both the hindwings and forewings are similar in size and shape. There are also many differences between these two orders which include size and the way they perch being the most notable. Dragonfly’s bodies are stout while the damselflies bodies are slender. Dragonflies perch with their wings flat and damselflies perch with their wings held over their back. The eyes of each insect may be the best features to determine which suborder you are observing. Dragonflies have eyes that appear to connect to one another and damselflies always have a distinct separation between their eyes.

Dragonflies like other insects go through a metamorphosis, however, theirs is known as an incomplete metamorphosis; they have no pupal stage, only an egg, larva (nymph), and adult stage. Dragonfly eggs are laid either directly into the water or into aquatic vegetation. The larvae which hatch from the eggs will remain in the water for months and even years, depending on the species, before emerging as an adult. The larvae are voracious hunters. The larvae of the darner species of dragonflies are identified as “crawlers”, which stalk their prey, in a cat-like fashion, advancing slowly until within striking distance. Another dragonfly species, the skimmer species are known as “sprawlers, camouflaging themselves with silt, waiting for prey to wander past; other larvae such clubtail species hunt by burrowing below the sand or silt. The burrowers attack as the prey advances toward them. 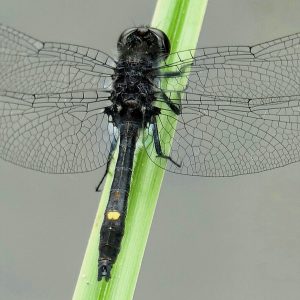 Dragonfly larvae, like many aquatic insects, need oxygen for survival. They have a unique method of extracting oxygen from the water. The larvae have gills that line the inside of their rectum. They can suck water into the tip of their abdomen, the gills extract the oxygen, and the water is expelled through the rectum; larvae can also escape from a predator using this same process of expelling water through its rectum to propel itself away. The final stage of metamorphosis is the emergence from aquatic larva to adult dragonfly. Generally, this will occur in the early morning. The larva (nymph) will crawl out of the water onto a cattail reed, rock, dock, or fallen log. After a short rest, the larva hooks its legs onto the perch, it will then split the skin of the back of its head. The adults’ thorax emerges first, the split enlarges and the head, compressed wings, legs, and part of the abdomen also emerge. Once these body parts have hardened the legs help to pull the rest of the abdomen free. The limp wings begin to fill with hemolymph (insect blood) and unfurl. Then the hemolymph is drawn back into its body. This newly emerged dragonfly, known as a teneral, rests until its wings harden. It may take as long as an hour before its first flight. Even though dragonflies differ in size per species they are all adults, there are no “baby’ dragonflies. The Common Green Darner (Anax junius) averages 3 inches in length while the Elfin Skimmer (Nannothemis bella) is merely 0.8 inches in length and yet both are full-sized adults.

Dragonflies have impressive aerial abilities which include both speed and agility. They can fly forwards, backward, glide, and hover. They do not bite or sting. They do not make a sound, do not have ears and cannot smell, but they do have incredible eyesight. They have enormous eyes, each composed of about 30,000 lenses. A quick turn of its head and a dragonfly can scan 360 degrees, in addition to seeing above and below. Researchers have learned that they can even see in color.
Even before our local dragonflies emerge from the water, it is possible to occasionally see a dragonfly in late April or early May as there is one dragonfly that migrates. Some Common Green Darners will migrate south, similar to the Monarch Butterfly migration it is believed that it takes several generations to complete the entire round trip. Researchers have even fitted some Common Green Darners with a miniature radio transmitter and followed their southbound migration.

Where can you find dragonflies? Almost everywhere, but some of my favorite spots are nearby ponds, streams, rivers, reservoirs, and lakes. Any place where you find Lily Pads you may find Lilypad Clubtails (Arigomphus furcifer) and Common Green Darners. Ponds are an excellent place to find Chalk-fronted Corporals (Ladona Julia), Common Whitetails (Plathemis Lydia), or Twelve-spotted Skimmers. There are many excellent field guidebooks which are useful for finding and identifying these amazing aerial delights.