Where I Wander – Autumn Courtship

Story and Photos by Joan Herrmann 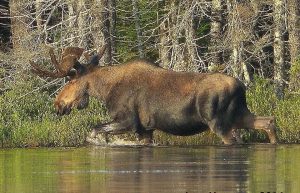 Whereiwander… Autumn is courtship time for many large mammals. Both deer and moose began the rutting (breeding) season about mid-September and it will continue through October and into November. Establishing dominance is most important for the males. Buck deer and bull moose go through yearly rituals to launch their species hierarchy. Sparring is a form of mock fighting and is usually a pushing and shoving match, but as the season progresses so does the level of the seriousness of the sparring. If one of the opponents doesn’t retreat the fighting may be more confrontational and result in a fatal injury to the adversary. Another component of the rut is done by scent marking; this is accomplished through both glandular secretions and urine. The scent-marking allows the female, of both deer and moose, to determine the male’s status, health, and availability. 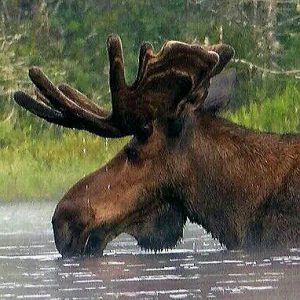 A bull moose (Alces alces) is an extremely large animal, weighing as much as fourteen hundred pounds it is easily four times the weight of a black bear. It is also very tall averaging six to seven-plus feet at the shoulders. They are able to browse high in the trees and wade into deep water when feeding on aquatic vegetation. They are strictly vegetarians eating both woody and herbaceous plants. Both deer and moose have no upper incisor teeth. Instead, they have a callous pad in the front of their upper jaw which lower incisors bite against. They tear off the plants and grind them with their back molars. Much like a cow, they have a four-chamber stomach. This allows them to eat quickly and digest their food at a later safer time. Their food passes through the first two chambers where it becomes cud (partially digested food). In a more restful spot, the cud is regurgitated and re-chewed until it is once again swallowed and finally digested in the next two chambers.

During the rutting season your chances of seeing a moose become greater. Beginning in September the usually reclusive bull moose will become more social and bull and cow moose can be seen together for several weeks during courting time. Calves may also be seen with the cows. After the rutting season ends in late November or early December groups of bulls, cows, calves and young bulls may even be found feeding together. However when spring comes the group will break up and the bulls will once again become solitary, while the cows will stay with their calf or calves until they are ready to give birth. 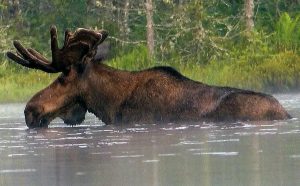 The bull sheds the antlers, which began growing in late spring and matured in late summer, sometime between December and March. The antlers may weigh as much as eighty pounds. In the early stages, the antler is covered with velvet (a fuzzy skin) that contains nerves and blood supply. The velvet provides nourishment to the growing bone and once the growth is completed the velvet is shed. A study of moose antlers revealed that they act as a parabolic reflector and aid the moose’s hearing. The older the bull moose the sooner it will shed its current antlers and the sooner the new one will begin to grow again. The only clue to determine the bull’s age is that the antlers become larger than the base each year. Bull calves have short spikes their first year and yearling and two-year-olds have spikes or branched antlers; not the flatten antlers of older bulls. Cows and bulls call to each other during mating season. The cow gives a loud call and the bull answers with a series of low short grunts. The courting has been documented to be three phases of courtship. In the first phase, the bull stands sideways in front of the cow, sometimes for several hours. If she moves he moves in front of her standing sideways again. In the second phase, the bull begins following closely behind the cow, moving as she moves. The third phase is when the cow consents to mating.

The cow moose gestation (the growth of the calf before birth) is about eight months. When the calf is ready to be born the cow will become confrontational with her previous calf, which is now a yearling and drives it away. Then she will find a secret spot to birth her new calf. Young cows usually have one calf, but mature cows may have twins. The calves are born in late May or early June. Within a few days, the calves are able to follow their mother on wobbly long legs. The calves weigh about twenty-five to thirty pounds but grow quickly their first year to about one hundred pounds. Moose are in their prime at about eight years old and have been known to live about twenty to twenty-five years. 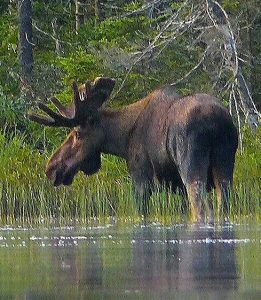 The color of a moose can range from tan to almost black. During the summer the hairs are solid, but in the fall the moose will molt its old hairs and will have grown several layers of new hair under the molted hair. One layer consists of wooly hair and the wooly hair is covered by hollow hairs which provided much more insulation for the winter. Both male and female moose have a dewlap, which is loose skin hanging from their neck or throat. The function of the dewlap (also known as a bell) is essentially not known, but it is theorized to be used for communication during the rut, to both smell and sight. Dewlaps may be found on dogs, bovines, some reptiles, and also on some birds.

Moose scat (dropping) changes seasonally depending on what the moose consumes. The scat may range from plops or patties to pellets. In the winter when their diet is mostly fibrous and they are eating twigs and bark the scat will be pellets. In spring and summer, they begin eating aquatic vegetation the scat will change to plops or patties. Moose tracks are impressive as its front hoof track can be between five to seven inches in length compared to a deer track that is between one to four inches in length.

Some other mammals that breed in autumn include cottontail rabbits, muskrats, red squirrels, and martens.