Where I Wander – What IS That

Photos and Story by Joan Herrmann 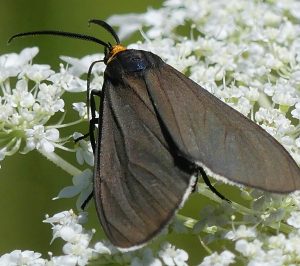 Whereiwander… quite often I wander with children and delight in the questions of “what is that?” which I am likely to hear throughout our hike. As a naturalist, often I can easily answer each question immediately, but it is even more gratifying for me to say “I’m not sure? Let’s do some research and find out what it is.” We are never too old to learn something new and we now have many more tools to assist our research efforts. My library of field guide books and books about flora and fauna fill many bookshelves. It is also a joy to have so much information available online. Some of the questions I have heard over the years include; “Why is there a bluish color on this piece of wood, which I just found, on the ground?”, “What’s making that loud noise?”, “Is that a butterfly or a moth?”. 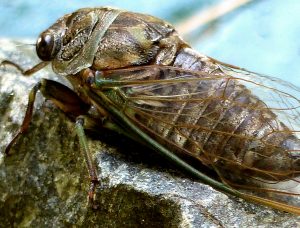 The answer to the first question was easy for me to answer as I had seen and posed the same question myself many years ago. The lovely blue-green coloring on the piece of wood looked like someone had taken a cyan-colored marker and colored it. After a bit of research, I learned that is wasn’t someone it was the results of fungus (mushroom) fruiting. The beautiful color came from the staining of the mycelium threads; these are the root-like threads that result from the germination (growth) of the spores. Spores are similar to seeds and are the reproductive part of a fungus. The fungus scientific name is Chlorociboria aeruginascens and one of its common names is Blue-green Staining mushroom. It is a cup-shaped mushroom which is extremely tiny and is, attached by a short stalk, to rotting wood of a fallen deciduous tree (one that loses its leaves in autumn), predominantly found on Oak trees. It prefers prolonged wet spells and may be found throughout the months of June through November. While trail hiking, if you notice a fallen log, you may want to examine what is growing on it. A collection of mosses, lichens, mushrooms and an assortment of plants, even small trees may be found. These fallen trees are known as “Nursery” trees and as they decompose they give life to many types of flora and may also harbor many types of critter beneath them; such as salamanders, snail eggs, and insect larvae. 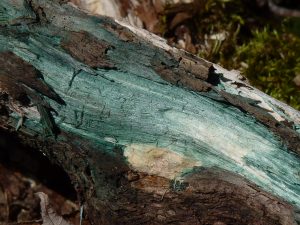 Loud and large are two descriptive words for Cicadas. If not already then soon, you will begin hearing the male cicadas “singing” their courtship songs. The sounds that they make are done by contracting their abdominal muscles continually to create this alluring call to the females. The adult cicadas are an often heard, but seldom seen insect because they spend most of their lives in the upper shelter (canopy) of trees. Occasionally we may see evidence of them in a shed exoskeleton (exuviae) that may be clinging to tree bark. The cicada life cycle has only three stages; egg, nymph, and adult which is similar to the incomplete metamorphous of grasshoppers. The female cicada may lay as many as four hundred eggs. She has a “saw-edged” ovipositor (egg-laying body part) and after mating, she will begin laying her eggs in tree branches and twigs. After hatching from the egg the nymph (which looks like a tiny adult) will fall to the ground and burrow into the soil. The burrow may be as much as eight feet deep. It will then create a chamber and feed from the xylem sap of tree roots. Cicadas prefer oak, willow, ash, and maple trees. Some cicadas are known as periodic cicadas and may take anywhere from thirteen to seventeen years to emerge. The ones that we are more likely to hear are the “dog-day” cicadas (Tibicen canicularis) which emerge within two to five years. Some people refer to them as locust, however, locust are a different genus, which actually includes cricket and grasshoppers, but not cicadas. While researching cicadas I learned that the Iroquois harvested the cicadas for food and that in China the cicadas are deep-fried and eaten also. The cicadas do not bite or sting. They have sucking mouthparts that they use to suck plant sap. They have numerous predators and provide food for birds, amphibians, fish, reptiles, and many mammals, including moles. 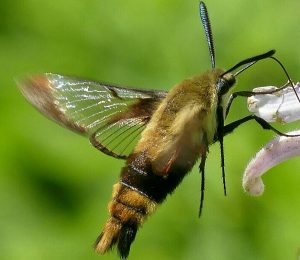 Is that a butterfly or a moth?, is a question which I am asked frequently. Butterflies and Moths both belong to the Order Lepidoptera; the Greek translation means scales (lepidos) and wings (ptera). Butterflies have six legs, two sets of wings (forewings and hindwings) a head, thorax, abdomen, and antennae (antenna singular) with clubbed tips. A moth has similar body parts, but their antennae are feathery or fringed. Butterflies are diurnal (active during daylight) while most moths are nocturnal (active during the night time). However, there are numerous moths that are actually active during the day and will feed and pollinate flowers just like butterflies. Three of the diurnal moths can be seen in my meadow especially when the native Bee-Balm (Monarda fistulosa) ,also known as Wild Bergamot, is blooming. One of these moths is the Hummingbird Clearwing (Hemaris thysbe). This is a small moth that is extremely quick in flight and hovers over flowers much the same way as a hummingbird. That is the reason for the first part of its common name. On close inspection you will notice that parts of its wings are clear thus the second name. It is often thought to be a “baby hummingbird”, but it is a full-grown moth. Another similar moth is the Snowberry Clearwing (Hemaris diffinis) which is sometimes mistaken for a bumblebee. It also has clear portions within its wings. Its body is black and yellow, in coloring, much like a bumblebee. The third visitor to the meadow reminds me of a “Caped Crusader” dressed in a grayish-black cape adorned with metallic blue. Its head is orange and it has large black eyes and black feathery antennae. It is called a Virginia Ctenucha (Ctenucha virginica). Its name is pronounced “ten-OOCH-ah”.

I hope that you will have some time to explore and find all of these interesting types of flora and fauna. If you have a question feel free to email me, with the information and if possible a photo, of the flora or fauna which you would like indentified. Email address jmhphoto8442@gmail.com and I truly hope to see you whereiwander.