Why have podcasts become so popular and what are they?

For those who might not know, a podcast is a recorded audio session, and then a series of those sessions or episodes, all focused on a popular topic or them. Think of the old radio shows where you used to tune in each week at the same time to listen to the show. Think of The Lone Ranger, or The Abbott and Costello Show, or ABC Mystery Theater.

Now, think of how technology has changed our lives. Take those shows, record them, and then be able to send them out via the Internet to your computer, phone, or tablet. Imagine being able to subscribe to a show so that you always know when there is a new one.

The vast majority of podcast shows tend to be completely original content. They can be any length, any frequency, any format, and cover any topic. Most podcasts today are audio, but video podcasts are becoming more popular. 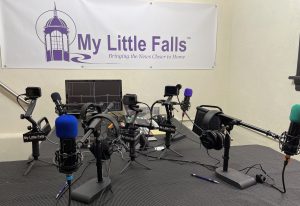 At My Little Falls, we’re going to put a real focus on growing the number of podcast shows that we have for two reasons. One, we know of several people who want to do one, and two, we know that our audience wants to hear more of them.

So, we decided to put together a studio, and then make them available in two different ways. The first harkens back to the old radio days, where you tune in on a specific night at a specific time, to listen to your favorite ‘show’.

The second is to offer them through all the favorite podcast platforms at the SAME time that they go live on the radio. So, if the show is going live on a Thursday night at 7 pm, it will be ‘live’ as a podcast at exactly the same time. Just search for My Little Falls on Apple Podcasts, Spotify, Anchor, etc.

Scott Kinville has been doing his hockey show for three months now and he said, “The thing I like the most about doing Marty’s Illegal Stick is the interactions I get with the people that are listening to our show. Most think a podcast is just sitting down in front of a microphone and talking – but it’s not. For one show, hours are spent doing research, writing show outlines and segments, getting guests, etc., or as our cohost, Rich Massucci says it’s ‘a labor of love’.”

“When we get feedback from our listeners it makes every bit of it worthwhile and then some. It also drives me to make each show better than the last and to try to reach as big of an audience as possible,” stated Kinville.

A new podcast show is going to air every Thursday night at 9 pm starting this week, and be available on Apple Podcasts, Spotify, Anchor, and wherever else you find your favorite shows. Sportsbeat with Rob Drumm is all about sports, any kind, and anywhere, with a special focus on the Mohawk Valley and Central New York.

Drumm is from Mohawk but went to Herkimer schools and he says that he’ll “bleed green until the day he dies.” He does stats for the football team there and has worked basketball games since high school.

He says that he bowled in high school, “basically because it was fun,” and that the fascination with sports came about because “I wasn’t good at it.”

“I was never going to be the star football player or the star baseball player. But, sports has that power to just take you away,” he said.

When Drumm talks about COVID and when sports started up again last fall he said, “There was a moment in time when sports came back on last year, both basketball and hockey, and people seemed to be able to take that collective breath and say ‘I’ve got something.’ It became the port in the storm where you could park.”

For high school kids, it’s an outlet he said. “There’s enough data out there that shows sports keeps kids in the classroom. It has a little bit of something for everybody, so I think that was my fascination with it.”

Asked why he’s doing a podcast, Drumm said, “It’s fun. You have conversations with people. It’s like radio on steroids.”

“Podcasting allows you to get all the love of radio at the time and place that you want. It’s on-demand radio,” he stated.

Drumm is the Democratic Commissioner for the Board of Elections in Herkimer County and Vice President at MOVAC Ambulance Corp in Mohawk.

He said that he and Scott Kinville had been talking about doing a podcast for a while. “He’s doing a great thing with his hockey niche.”

Drumm’s podcast show is replacing the show called The Press Box, which was hosted by Travis Heiser. He said, “I needed a hobby kind of thing, and I don’t mind having conversations with people. I know enough people in the sports community I think to at least put together some kind of show, so why not give it a shot.”

He says that he wants to get local coaches on the show, amazing athletes, and the player that they’re doing a Go-Fund-Me for. “We’re a community here and we’re rebranding the show. From field hockey, bowling, football, to baseball, soccer, and even badminton.”

Drumm says he’s even going to cover e-sports as well. “COVID really launched e-sports because it was just in its infancy and then all of a sudden, everyone is doing it.”

“When people think of sports, they think of ‘My Sports’. It’s all sports,” he said.

Want to do your own podcast?

If you have ever thought of doing your own podcast, now is the time to move forward with the idea. If you have any questions, you can call 315-508-5310 or email news@mylittlefalls.com to discuss it. It’s free, you will get training, and what the heck…you may even have a little fun doing it.