This author admits upfront that he is both a local history nut and a diehard New York Yankees fan. The intertwined paths of baseball and American history resonate with me. Older readers of this piece will likely recall watching Ted Williams, Joe DiMaggio, and the transformational impact of Jackie Robinson. This author’s baseball roots trace to Willie Mays, Duke Snyder, and Mickey Mantle, ah, The Mick, my favorite. I grew up assuming that the Yankees would always play in the World Series each year.

2021 Canal Days Celebration included the return of Vintage Base Ball to Little Falls in the form of a three-team, three-game, round-robin tournament. The newly formed Little Falls Alerts competed against the Catskill area Bovina Dairymen and the Mountain Athletic Club, all retrieved names from the earliest days of American baseball. 1860s, 1880s, and 1890s era base ball game rules were in place at different times during the three games.

Early-era Little Falls base ball teams included the Rough and Readys and the Pastimes in the 1860s, the Excelsiors in the 1870s, and the Rocktons and the Alerts in the 1880s–90s. The Alerts took the field in the north end of Ward Square in the 1880s-90s for most of their games. Games were heavily attended.

Authenticity, gentlemanly conduct, high-spirited competitiveness, and inter-team camaraderie graced the daylong tournament. The local nine may have lost both of their games to the longer-established downstate teams, but their athleticism and baseball acumen were in evidence throughout; an important foothold was re-established and another Little Falls tradition has been reborn. Vintage base ball is back in Little Falls after a long hiatus. The new Alerts will now carry forward our vintage base ball banner. Three cheers for the Alerts! 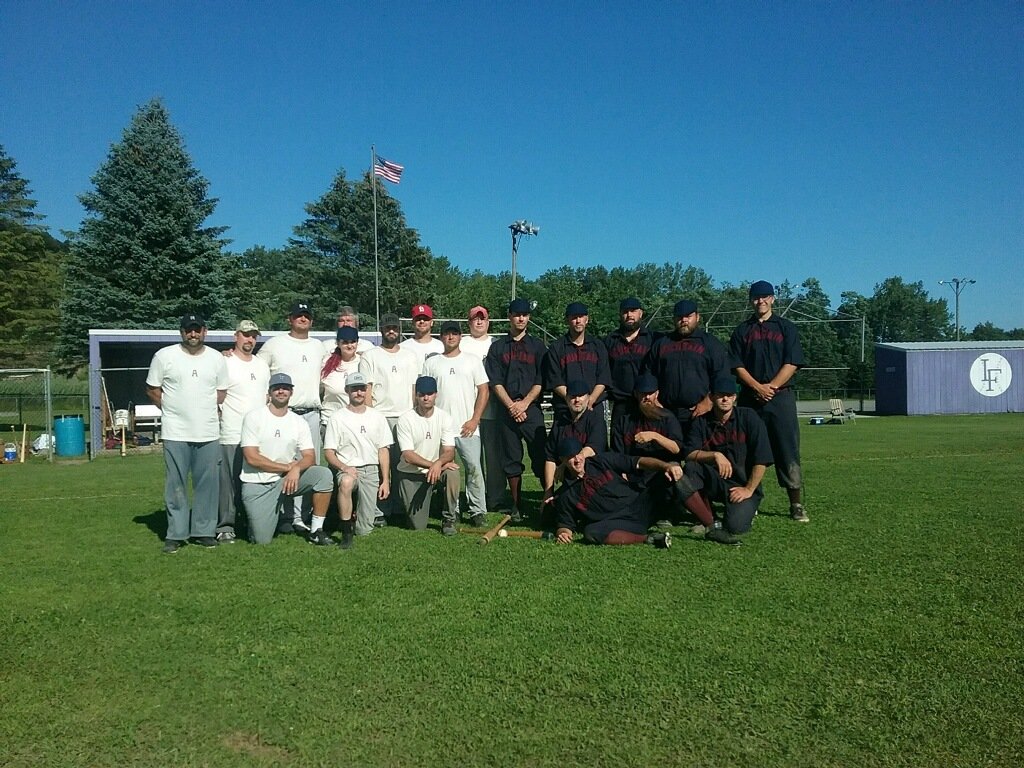 Photo by Pat Gressler – The Little Falls Alerts (right in yellow) and the Mountain Athletic Club Base Ball teams.

Vintage base ball both resembles and differs from our modern national pastime. The players do not wear ball gloves, hit balls caught on the first bounce are still outs; the difference in rules is too complex to be fully captured in this piece.

Vintage base ball equipment, including bats, balls, and catcher’s gear is also quite different.

The Little Falls Historical Society has provided financial sponsorship for the Alerts, including the purchase of four high-quality bats hand-turned to perfection by local craftsman Ian Giudilli who labeled each bat “made in Little Falls” and “Rough and Ready.”