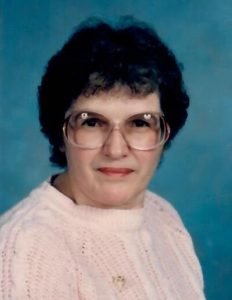 She was born on September 21, 1938, on the family farm on Burrell Road in the Town of Manheim, New York, and was the daughter of the late, William and Mary (Petkovsek) Gorinshek. Anne was educated at West Canada Central School and graduated with the Class of 1956.

On November 9, 1963, Anne was united in marriage to Roger W. Cromer at St. Joseph’s Catholic Church in Dolgeville, New York. The couple shared a blessed union of 57 years where they raised their four sons in a loving home.

Anne was formerly employed with Daniel Green Shoe Company in Dolgeville, New York for thirty years until their untimely closing in 1997 when the company closed. Anne retired after many years of service.

She was a devout and faithful communicant of St. Joseph’s Roman Catholic Church in Dolgeville, New York where she was also a Eucharistic Minister. Anne was a former member of the Dolgeville Volunteer Fire Department Ladies Auxiliary.

Anne was a loving homemaker and enjoyed baking especially her famous chocolate chip cookies and nut bread. She took care of her home, liked to play cards, and relished in sending her grandchildren cookies for their birthdays. Her most precious time was spent in the company of her husband, four sons, and their families and her special bonds with her sisters. A loving wife, mother, grandmother, great-grandmother, sister, and friend, Anne will be dearly missed by all who knew her.

Calling hours will be held on Monday, April 5, 2021, from 4 p.m. to 7 p.m. at Miller-Plonka Funeral Home, 30 Wolf Street, Dolgeville, New York 13329. A funeral service will be held on Tuesday, April 6, 2021, at 10 a.m. also at the funeral home where the service will be offered by Rev. Brian K. Slezak, officiating. Procession will follow to St. Joseph’s Cemetery, Dolgeville, New York where she will be laid to rest.

To leave a message of sympathy for the Cromer Family, please visit www.millerplonkafuneralhome.com and sign the guest book.