Chicks Along the Canal turns ten

It seems like just yesterday, but for Juli Webster, it was ten years ago that the idea of Chicks Along the Canal started, becoming a marketplace for creative female entrepreneurs.

“It started out as a conversation between Christine Shaheen Wood and me in the Stone Mill building. She had her own makeup shop where I had the Mustard Seed on the 1st floor. It was just a winter conversation,” said Webster.

Webster had been in the show circuit and thought that doing a show together would be fun, where Wood could do her beauty products and a makeover, and she could do her thing. “We didn’t quite fit together as she was doing products made by someone else, not things she made herself, so that didn’t fit in an arts and crafts fair.”

They got to thinking about some of the other women that they knew and they thought of an antique dealer, then a digital artist, and then an up recycling girl, taking old furniture and making it new again, and others. She said “They’re all terribly different, how would you get that to be the theme? Well, the common factor, was that we were all women in business.”

And that conversation and thought process are what got Chicks Along the Canal started ten years ago. “There was no place that we all fit,” she said.

The Canal Celebration group was looking for an anchor event to happen in Canal Place, and the concept of Chicks Along the Canal fit perfectly.

According to Webster, ten years later, the show is a lot like the beginning. “It’s just grown in the number of vendors and more of a party atmosphere. We really decided that we wanted to keep it kind of friendly to all. We wanted it to be not too intimidating for a first-time vendor.”

They allow direct sales, handmade things, antique and vintage items. “Anyway a woman is supporting herself in business,” she said.

There’s a new all-girl food truck this year called Southern Girls Food and Leslie Kubica Illustrations is a relatively new vendor as well as Rainbow Mermaid Perls, according to Webster. “We’ve done a lot of shows, and now ten years later, we’ve REALLY done a lot of shows,” she said. “We have a lot of girls that are coming back.”

“We wanted it to be a place where you could come and ask questions of other women vendors. What other shows do you do, what works for you, how do you deal with sales tax, what do you have for ideas for display?” stated Webster.

She says that the vendors keep coming back because they like the vibe about the show. “That’s always the answer as to why they keep coming back. Everybody in Little Falls is so supportive and all the vendors are so friendly and they are so willing to share their knowledge, so you’re able to make nice connections along the way.” 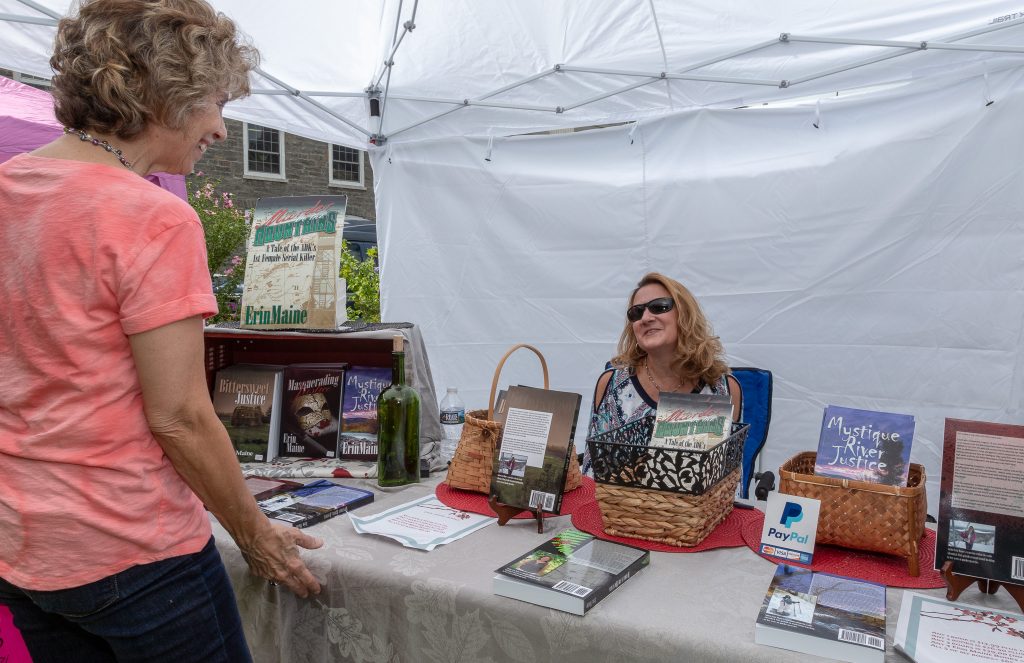 Photo by Dave Warner – One of the ‘chicks’ talks to a potential customer during last years Chicks Along the Canal event.

“We have been fortunate because we’re part of the Canal Celebration as a whole and they pick our bands for us. We’ve even had woman-centered entertainment and we love that,” she said. “We’ve just been fortunate enough to have a fabulous mix of everything. Food, music, new, old and everything in-between,” said Webster.

“This is our first Chicks where it hasn’t been 110 degrees or raining. It’s supposed to be a lovely weekend,” she stated.

The Chicks Along the Canal will run from 10 am until 5 pm, Saturday, August 10th and 11 am until 4 pm on Sunday, August 11th in Canal Place. There will be music all day, food trucks, jewelry, art, clothing, handmade treasures, garden, furniture, candy, junktiques and a wide variety of items to enrich the body and soul.

It’s a family-friendly event and admission is free. For more information visit www.chicksalongthecanal.com.