DiamondDawgs ready to take the field next week

Team owner Travis Heiser sets up social distancing markers at Veterans Memorial Field prior to the start of the 2021 DiamondDawgs season.

Travis Heiser, owner of the Mohawk Valley DiamondDawgs is ready to get the team back out on the field for the 2021 season after not being able to field a team last year.

He said that being on the field after an absence of almost two years was filled with mixed emotions. “After going through what we had to last year and finally getting the opportunity to be back in 2021 is definitely exciting.” 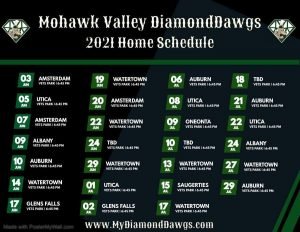 Heiser said that they hit the ground running last week, getting ready for opening day on June 3rd. “The field looks great. I think the City has done a good job.”

The important thing for Heiser this year is to not only win baseball games but to keep people safe. “I’m going to measure success this year not only on the field but really off the field as well trying to keep everyone safe and healthy.”

“I think the community is really ready for this and we’re excited about that,” he said.

Heiser talked about some exciting new players that will be on the field, as well as some returning veterans. “We have Keegan Leffler coming back, who played at Herkimer College, as well as Cedric Rose who plays at UMass Lowell.”

He said that local talent is on the roster as well, including Eddie Rogers. “It’s always important to me to have a local player who can play at this level and Eddie is going to have his shot.”

A new coach will be heading up the team as two-time PGCBL Championship Coach Steve Luby has been promoted to head coach.

Luby who has been with the DiamondDawgs organization for six seasons has served both as an Associate and Assistant Head Coach and has compiled a 117-73 record.

“We’re really excited to have him back and the fans like Coach Luby and he’s becoming a natural fit her for the DiamondDawgs,” stated Heiser. “He’s pretty jacked up and ready to get back and see the people.”

John Fureno is joining the team as an assistant coach. He retired from teaching fifth-grade math at Harry Hoag School and served Fort Plain for several decades as an athletic coach.

“He was a high school coach under Coach Phillips who just got his 800th win, so he knows the game of baseball,” stated Heiser. “What a retirement gig for a retired school teacher to come up and do baseball here this summer at Vets Park.”

Heiser says that they’ll be following all of the state guidelines for COVID-19. “What that looks like on day one, may look different on day 25. Hopefully, things will loosen up. The more they do, the more we’ll be able to do.”

One of the things that will be missing this year is the opening night fireworks display. “We’re going to be doing something else that’s new and exciting in July – something that our fans have not experienced here yet,” he said.

As for a hint? He said it will be on the field, and it will involve ‘lights’.