Kayla Farrish takes a quick break from filming while in Canal Place.

This week, a film crew is spending seven days in Little Falls filming parts of a movie called ‘Martyr’s Fiction’ by Kayla Farrish. The movie maps the inevitable tipping point of five venturers watching their dreams crash into surreal unreckoned reality. They question the affordability to dream and to live, in a dance-theater film. It is shown through the perspective of black and brown folks, women, and a woman of Jewish heritage navigating life, violence, history/memory, and boundaries in America.

As part of supporting the production here, the crew (6 actors and 5 production members) were asked by The Creative Outpost to do two things: Allow a couple of interns to be on set for part of one day, and to put on a community presentation about filmmaking, what their film is about, etc. The students had their time on set on Monday.

Farrish wrote the script, is co-producing, and performing in the film as well. “I got this creative commission through a dance organization at the beginning of 2020 to make something totally new.”

Farrish grew up in North Carolina and after visiting New York City many times, decided to move there. “I wanted to go to a bigger city and do something in the arts. I don’t think at the time I knew how much I loved storytelling and film,” she said. “I thought I’d be a dancer or choreographer, but I was always watching these films and imagining music videos.”

Originally the film was supposed to be a live performance, but from the beginning, she felt like it was a great fit for a film. “I was thinking about dreaming and surrealism. I had done conceptual works before with socio-political themes or history and how that affects us now.”

She explored what surrealism and dreaming really meant and she immediately thought of her dad who had night terrors growing up. “We didn’t call them night terrors, we just thought that’s how he sleeps. Loud and flying out of the chair yelling and screaming and it would be, ‘oh dad’…”

Because of this, she started asking people about how they dream and what their realities were, and what those dreams meant to them. “It just opened up a lot of questions for me,” she stated.

She said that Little Falls feels like the nice in-between of the big city and the suburbs. “I miss nature, I miss the fact that you can just go up and talk to people. Not that you can’t in the City, it’s just a little bit different.” 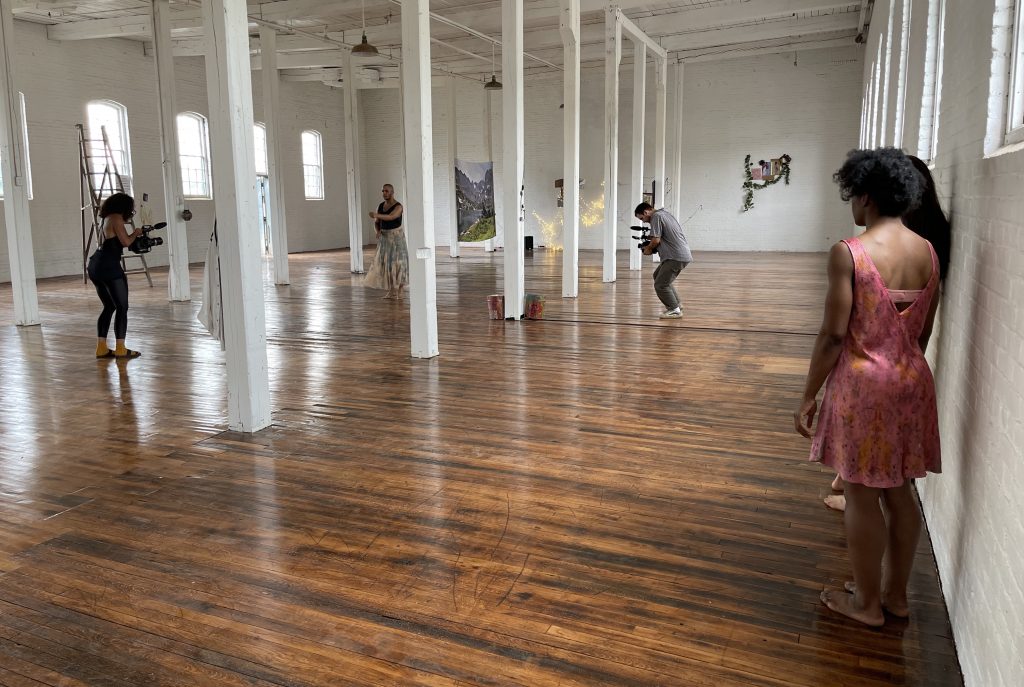 Photo by Dave Warner – Part of the cast and crew during filming on the third floor of the Vincent Building.

Daniel Preston allowed the crew to use the Vincent Building in Canal Place and she said, “The building has been amazing and really exciting. We’ve been able to transform it into these different worlds. Some places felt like a real gallery that could come to life in an immersive way and then one place we turned into a memorial. The bottom floor was the reality that became a music video. It could just be transformed,” she stated.

Farrish said, “It’s so inspiring with all the ranges from beautiful to the history. I just want to be here to make a work or write the next movie from here.”

They are also filming in Hannah Straney’s parent’s house and Farrish said that the way it is built connects with one of the dreams that she has had. “All of the rooms connect on the top, bottom, and basement area. It was so strange connecting with this place and my reoccurring dream where I’m entering this house that is room to room where I can’t get to the end because it’s continuous.” 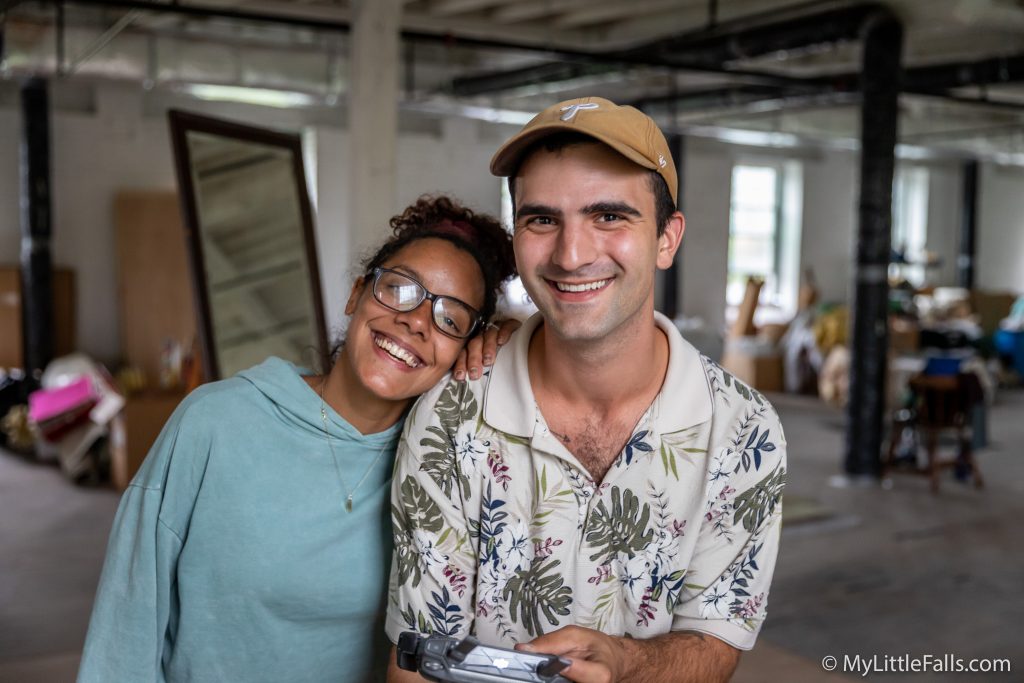 Photo by Dave Warner – Kerime Konur and Jacob Kruty share a quick moment while filming on the fourth floor of the Stone Mill building, which Rock City Development allowed them to use.

Kerime Konur a co-director and ADA on the project said, “I’ve been a part of the process for about a year and a half now, creative directing, helping with concept development and rehearsal directing, logging all the video content and translating that to a physical script in order to lay out a shot list.”

She said, “Now we’re here creating this giant film and it’s been amazing. I’ve been a camera operator on this as well and it’s been an experience that I’ve kind of been flourishing in alongside Kayla and that’s really exciting.”

The exclusive community presentation to the public will be held in the new Rock City Centre facility, which is not yet open, 690 Main Street across from City Hall at 9 am on Monday morning the 21st of June. It is an RSVP-only event limited to between 20-25 people (the event is now full).

It will be a great way to experience the new building and an opportunity to support the film industry and the tiny steps that we are taking to grow this industry in Little Falls.

This was a collaborative venture by several organizations in Little Falls to make this happen. The Creative Outpost coordinated the student involvement in the project, access to the Vincent Building, and the community presentation at Rock City Centre. The Youth & Family Center (formerly the YMCA) handled the business side of things such as insurance for the project, and Rock City Development provided access for the film crew for the fourth floor of the Stone Mill building, while Daniel Preston allowed access to the Vincent Building for staging and filming. 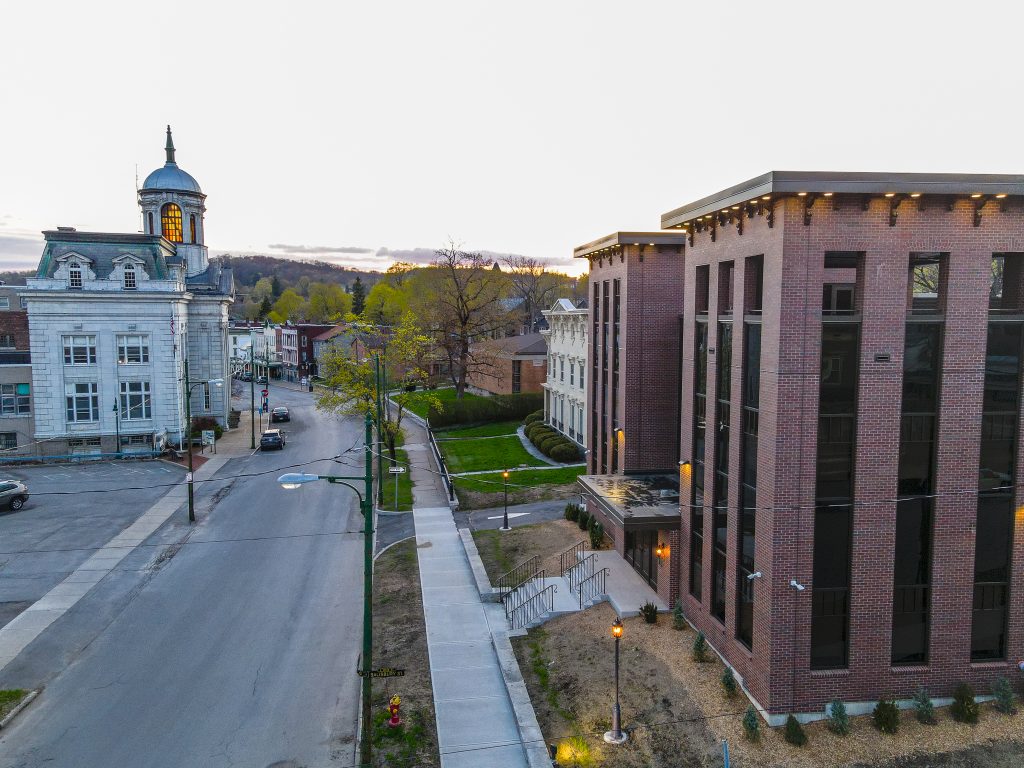