It doesn’t look like much now, but before New Year’s Eve, an ice skating rink will sprout up on the old Monroe Street field.

The City is planning on having the ice skating rink on Monroe Street back in operation by the 1st of January after an almost 20-year absence.

Mayor Mark Blask said that the idea is similar to the one the City had for building the drive-in movie this summer in Veterans Memorial Park, but the weather will play an important part in how well the plan goes.

“For those of you who grew up in Little Falls, I am sure you have great memories of skating at Monroe Street Field. For those of you not from here, the Monroe Street rink was an iconic outdoor skating rink in the city that was wildly popular. It is small-town Americana at its best. It was first opened in the 1930s and stayed opened for the next seven decades. If there was a year to bring it back, this is it,” he stated.

The plan is to have the rink open all day long starting on New Year’s Eve, with the lights on from 5 – 9 pm each day. The City is working on having music there as well.

City Engineer Chester P. Szymanski III said, “The snow is plowed out of the way now and we’re going to expand it a little bit more. As soon as it turns colder, we’ll start spraying the base, which will take a couple of nights to form.”

“There will also be three portable lights out there, that have been rented for a three-month period,” he stated. 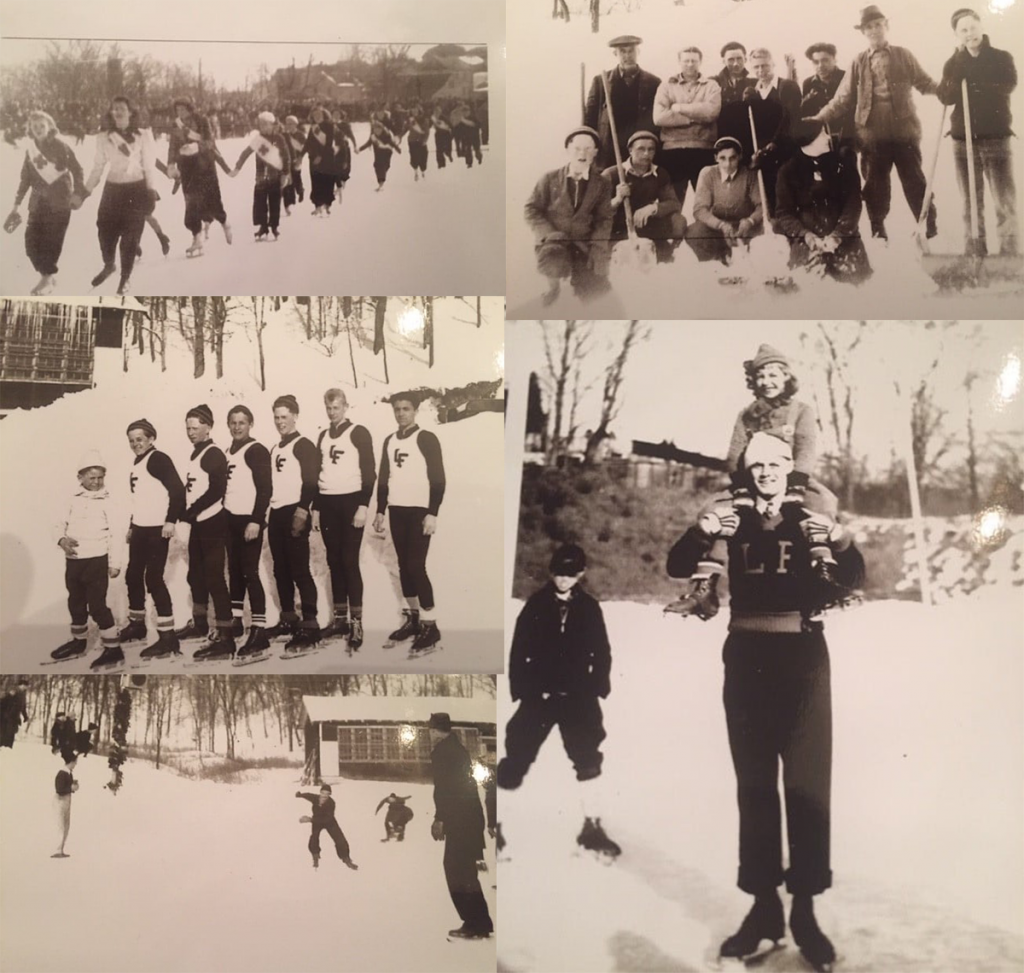 Photos provided by the Little Falls Historical Society – Some images of skating at the Monroe Street rink from the 1940s.

Blask stated, “We will also be putting a plaque up at the rink to properly recognize George Malavasic. George ran and maintained the rink for over 35 years. He organized annual carnivals and made sure every detail was taken care of. George was instrumental in keeping the rink going for almost four decades, and recognizing him is long overdue.”

The five Kaufman children spent plenty of time at the rink when they were growing up, and Deborah Kaufman said, “When we were little, we’d go with our mother and dad and the whole family would go. We always got skates at Christmas for some reason. The girl’s skates were always white and the boys were always black.”

She said that as you got older, you went from little platform skates to lace-up skates. “You really knew you’d arrived when you had the lace-up skates. When we were teenagers, the thing was to adorn our skates with yarn pompoms that we would make. We’d raid our mothers knitting baskets and get the yarn. The more colorful the better, and we’d wrap it around a little piece of cardboard a zillion times. The fatter the better.”

Kaufman said they would then tie the pompoms to the end of the skates so that when they were out there skating, they felt they were really in style. “It would oftentimes match what we were wearing. You’d wear tights with these skating skirts and it was always fur gloves and fur little hats and earmuffs. It was more than just skating for young girls, it was early fashion.”

Dave Reardon is now 93 and has been skating his whole life, but the rink on Monroe Street was part of what got him interested in the sport. “I used to go all the time, but it was cold. It was amazing. Almost the whole City skated those days. Everybody had skates and everybody loved skating. It was a busy place.”

He said that he has skated his whole life until just a few months ago. “I became an indoor skater…a serious figure skater and it became a life-time sport for me.”

Reardon said that they tried to make a go of a skating rink a few years ago in Eastern Park, “It’s hard now with the weather. We used to have winter from December 8th until March whatever. It was cold all the time and you could keep a rink. Nowadays they do a rink and a week later the sun comes out and it goes into the ground.”

The rink used to take up the entire field and when it would snow, they would just push it to the edges. “It would get smaller and smaller as the winter wore on. It was just an amazing place where everybody skated. On weekends, that place was jammed,” stated Reardon.

“You’d walk all the way up there, twice a day on Saturday and Sunday to skate. I froze my ears up there one night and my mother had to tie them against my head they were so swollen,” he stated.

Reardon said that there even used to be ice dancing up there, which was very unique. “The women used to wear the short dresses that skaters indoors wear and they used to skate around the rink to the music.”

“You would tie your skates around your shoulders and you would be just walking by a house and a kid would be looking out the window and say ‘hold up, I’m coming with you.’ Everyone skated, of every age. It was a very different time,” she said.

All expenses associated with the rink are being picked up by the Burrows Foundation. According to Blask, “They are always so incredibly gracious, and we cannot thank them enough.”