(R-L) Hanna Collis, Karen Filipski, Dana Clanton, and Leah Putney all pose in front of some of the gifts they’ve purchased with the money that has been raised.

The Little Falls Lumber & Concrete Company employees have been saving money for almost the entire year to supply needy families and pets with holiday gifts. The initial idea started about four years ago, and the goal was to sell sweatshirts and use the money so they could do something special with those funds at the end of the year.

According to Karen Filipski, “The reason we were going to do this is in memory of my brother Mike Petrie, who was a State Trooper. At the end of the first year, we were going to either adopt a family or donate the funds.”

One time they did adopt a family through the Gram Lorraine Children’s Christmas Program. The next year, they donated to the program.

“We decided last year that we wanted to pick our own family and buy for them with the proceeds from the sale of the sweatshirts,” she said. “It was a family of three boys from Ilion, and we just had a really good time. We delivered the gifts to the recipients.”

The schools make recommendations as to which family might be most deserving.

This year, some employees wanted to step the program up, so anyone who wanted to get on board could play paycheck poker.

“You had to pay $2.00 per week to participate. Whoever had the best hand by their paycheck number would win half the pot. On average, it was $18 a week that somebody would win. The other half went into the pot,” stated Filipski.

Many of the employees just donated their winnings back into the pot.

“We didn’t start this until about April, and we went through November so we could have time to identify the families. Just from paycheck poker alone, we raised over $1,200.00.”

All three company locations have participated in the fundraising, from Syracuse to Schenectady. “That meant that it just wasn’t people here in Little Falls and the Mohawk Valley that would benefit.”

Schenectady picked a family with three children that they’ve purchased gifts for, while Syracuse has a person in hospice who has a daughter and grandkids they’ll donate to.

They’ve also picked 20 high school kids that will be receiving gifts as well. “We really wanted the teenagers to get something because they are sometimes forgotten,” she stated.

Between the sweatshirts and paycheck poker, they raised $2,000.00 and wondered what else they could do if they raised more.

“We reached out and put it on Facebook and social media, and we had several very generous additional donations like McDonald’s, Dunkin Donuts, and Stewarts gift cards.”

“I will say that Niki Marie from Styles on Main had a very generous donation of haircuts…she donated twenty of them, and she also gave us a monetary donation,” stated Filipski.

Hummels Office Supply and additional donations from the employees at the company took it to the next level.

“The best thing about this is that the two families in Syracuse and Schenectady will have over $500 in gifts coming to them. Each one of the students will have well over $150 each.”

She said that she feels they really stepped up their game. “We’ve had a good time, and it just makes us feel happy.”

They have received pictures and videos from some families in the past, showing how the children reacted to the gifts. “When you see that, we still laugh about it today because it was so exciting for them.”

The company also ensures that there is a ‘family’ gift so that the parents are included. “We gave the Syracuse family a movie and dinner night with popcorn, candy, and soda.”

Filipski said her brother loved Christmas, even though he didn’t start shopping until the 23rd or 24th of the month. “He made sure that everybody got a gift. It didn’t matter how big or small they were.”

A total of thirty children will receive gifts this year, and the fundraising went so well that they’ll also donate $250 to the Herkimer County Humane Society.

Next year, they plan on continuing the paycheck poker and the sweatshirts; hopefully, the excitement will continue.

“They see this and think it’s a great thing. It’s all of the employees working together because I couldn’t do this alone,” she stated. 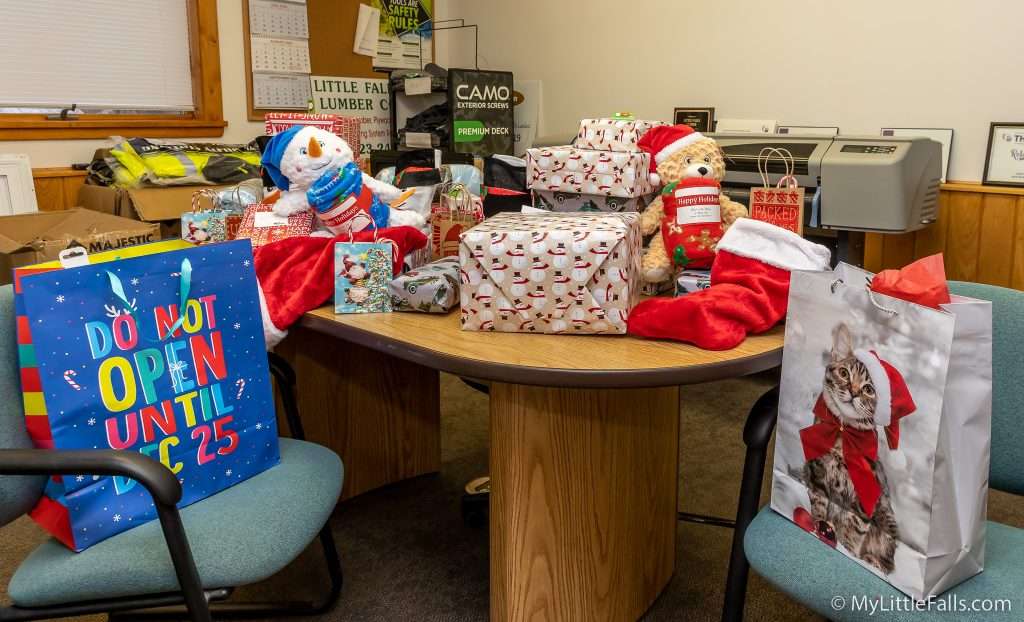 Photo by Dave Warner – Additional packages are wrapped and ready to go in another room for needy families.