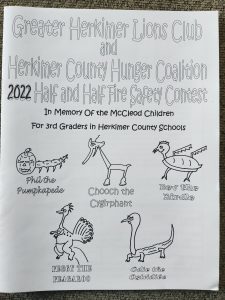 To hear my daughter tell it, and she was there, the six young children who regularly visited the Monroe Street Municipal Pool in Little Falls were “as cute as can be, well-behaved little angels.” Raised by a single mother who struggled to make ends meet, economic circumstances prevented them from enjoying the week-long vacations or trips to Caroga or Pine Lake amusement parks enjoyed by many of their peers-some who took great pleasure in making them the subject of their cruel taunts. But while they might be lacking in material possessions, they certainly were not in terms of moral character. Their loving mother saw that they never missed a Sunday mass. That year the three oldest boys were cast to play the three wise men in the Christmas play.

As an example of their moral character, Jen related the following experience to me. At that summer’s end, the oldest boy, 10-year-old Douglas, took money he had earned doing odd jobs and, instead of spending it on himself, bought pizzas for Jen and her fellow lifeguards at the city pool. Why? Because they were nice to him. And had circumstances been different, the kids would have enjoyed a truly Merry Christmas compliments of my HCCC Kris Cagwin Volunteers’ Christmas Adopt-A-Child Program (today’s Gram Lorraine Program).

Tragically, three days before Christmas 1991, the six children of Sheila McCleod perished in a housefire. It was later determined that papers piled too close to a space heater ignited, causing the fatal blaze. Upon learning about the tragedy after returning from vacation, the same students who donated the gifts (which ironically were not affected by the fire) asked me what they could do in the children’s memories to help prevent another calamity of this nature from ever recurring. The answer was the “Never Again Project.”

The latter took several forms over the next three decades, including a task force comprised of HCCC and Little Falls High School students who, in early 1992, went house to house distributing fire safety information and reminding residents to check their smoke detectors-similar canvassing was continued by the college students for the next two years throughout the Valley; the Six Angels of Christmas ornament sale which raised over $15,000 to purchase one of the most effective means of entertaining-educating youngsters about fire safety -Sparky the Fire Robot; most recently, with the Greater Herkimer Lions Club, the Herkimer County Hunger Coalition sponsored the Half and Half Fire Safety Contest for interested area third-graders.

This year the “Never Again Project” is offering County elementary schools a front-back page flyer for each student Pre-K through grade 5 and, for third graders, the opportunity to participate in the Half and Half Contest-a half and half is half one thing (e.g., ostrich) and half another (e.g., crocodile)-or Ostridile. Past experiences indicate that kids love inventing their own half and halfs. Incidentally, half and halfs were the brainchild of my then 9-year-old nephew Logan Crouse.

Participants must include with their masterpieces and exit plans for their homes to enter. The contest booklet also includes four pages of invaluable fire safety-escape information. All that teachers from participating schools need to do is to pass out and go over the flyer and for third grade, pass out the booklet, collect and turn in the half and half entries. All participants receive a certificate, and prizes are awarded for places one-four.

October is Fire Prevention Month. Regardless of whether or not they opt to participate in “Never Again,” we encourage area schools to make a concerted effort to educate their students about the basics of fire safety and remind all parents to check their smoke detectors monthly. By doing so, another tragedy like the McCleod’s can be prevented.