Niki Marie Messina shows off her new logo of the hair salon she’ll be opening in June on Main Street in Little Falls.

Little Falls native Niki Marie Messina is getting ready to open her third hair salon on June 22, 2022, this one on Main Street in the City.

After graduating from high school in 1999, Messina went to cosmetology school in Albany, came back to the area, and started her career 20 years ago. “I’ve always been playing with hair. I remember sitting in the living room with my best friend and pulling her hair through a cap,” she said.

Messina said she’d sit on the couch and have her friend sit on the floor and do this for hours. “It was a mess. It always turned orange, no matter what. But, that’s how I started.”

The first location she opened was out of her house in 2009 in Ilion. “I grew out of the salon that I was at, so it was time for me to move on and start my own,” she stated. “I was in the house for almost a year and it just got to be too much. It was too busy, there were two of us, and we just ended up with too many clients, so we opened a storefront in Ilion in August of 2010.”

Two years ago, in the middle of the pandemic, she decided to open her second location in Utica. “I was planning on opening in May of 2020, but everything shut down. They told us salons could open back up in June, so we opened Ilion to see what would happen. We had so many regulations to deal with.”

After a month of figuring it out in Ilion, she decided to open the Utica store because they had been paying rent on the location without being able to open it. “It was ready to go, so we opened the salon. Two years later, we’re doing well,” stated Messina.

She attributes a lot of her success to her husband, who stays home with her four children. She even has plans to get them involved in the businesses when they get older. Her husband Casey’s oldest daughter is very interested. “She’s already ready to go, so she’s definitely been watching me. I always tell her she’s going to take over one of the salons and it’s going to be hers.”

Messina chose Little Falls for her third location, “Because it’s my hometown.”

“We did a lot of research trying to find the perfect spot here and Cathy Christman contacted me on Facebook about this place (next to Copper Moose). “I had first dibs and it was really the only spot I wanted to be.”

The traffic from White Rose, Copper Moose, and other businesses will shine a light on her new location. “We were saying that we should put a hole in the wall so Copper Moose could just pass the beer over.”

She states that Little Falls has just come so far over the years when it comes to being a great place to have a business, and it’s the perfect spot for her next venture.

For the timing of her opening, she had to work things out between her kids, her husband, and their schedule. 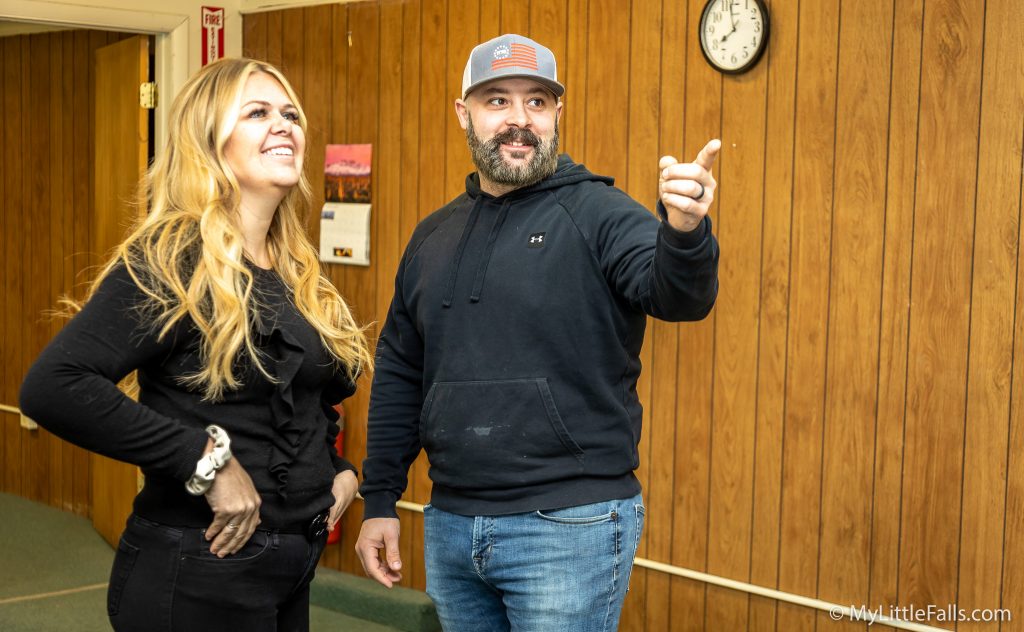 Photo by Dave Warner – Niki Marie’s husband Casey, points out some of the renovation work that will need to be done in their new Little Falls location.

“We’re very involved with the community and sports. Both girls play softball and both boys play baseball. My husband is also vice president of POP Warner football, and my life ends when it starts August 1st.”

So, she figured that everything had to be finished before the end of June when it came to the renovations that needed to be done. “I don’t have him anymore when August comes. Both boys play tackle football and both girls cheerlead. We’re just all over the place, so it’s got to be done by then.”

“My manager is going to be Angela Curtacci Shepardson and she is going to be running the place and managing everything. She’s worked in Ilion for me for ten years. We’re waiting for her to get married in June. She’s going to go on her honeymoon and then come here, so we’ll be ready to rock,” she stated.

They intend to knock down one of the front walls in the existing space to create a nice waiting area and then the salon area, which will be opened up as well. “We’re going to build a few different rooms so we have a lash room, wax room, facial, and then a back office, lunch, and break room.”

Messina said that her style is more of a modern upscale one. “Each girl that I hire, I train personally for six months. I make sure that they’re ready to go and up to my standards. I’m very particular about the work that comes out of the salon. When I feel like they’re ready, I’ll put them on the floor.”

She says that they work hard and train on all of the newest styles and trends.

Messina says that she’ll start with three or four girls at the Little Falls location, and then go from there. “I started with three in Ilion, and now we’re up to nine. We have plenty of space here to grow.”

“It will be nice to bring an upscale chic salon to Little Falls because there really isn’t one close,” she stated.

Style on Main can be found on Facebook and they are booking appointments now at www.Nikimariessalon.com, just choose the Little Falls location.