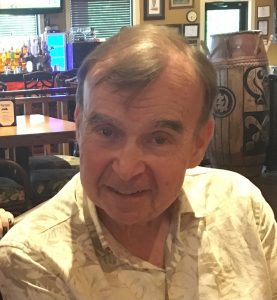 The Rev. Richard L. Lawrence, age 74, of Springfield, MA, and a former Herkimer resident, loving husband of the Rev. Patricia “Patti” (Hadcock) Lawrence, died at the Jewish Geriatric Lifecare Center in Longmeadow, MA early Thursday morning, January 7, 2021.  His peaceful passing was the result of many years of decline due to Normal Pressure Hydrocephalus Dementia.

The Reverend Richard L. Lawrence was born in Steubenville, OH on September 29, 1946, to Raymond and Evelyn McCloskey Lawrence.  Richard was the only son in a family of ten children.  Growing up with nine sisters gave him a close understanding of females, which became a gift for our family as he became the father of four girls.  Richard was a 1966 graduate of Jefferson-Union High School in Richmond, Ohio.  He earned a Bachelor’s degree in Psychology from the University of Steubenville, Ohio in 1970 and a Master of Divinity degree from Methodist Theological School in Ohio in 1973.

On February 10, 1973, he married Patricia Hadcock at the Methodist Theological School in Ohio, where they met.  They were blessed with four beautiful daughters: Rachael, Sarah, Rebekah, and Leah, all who adored their loving, thoughtful father.

Richard was ordained as an Elder by the East Ohio Conference of the United Methodist Church in 1974.  He served as pastor of Ohio churches in Norwalk, North Fairfield, and Bloomville until 1988.  He then worked for Seneca County, OH Department of Social Services, until moving to Utica, NY in 1991, where he became Resident Manager for group homes with Catholic Charities.  He retired from this work in 2009.

Richard was a fitness fanatic!  He was a long-distance runner for decades until he could no longer run.  He loved weightlifting and body-building and was always in great physical shape. These last ten years proved difficult as he mourned the loss of running especially.  He was a dog lover, who missed his last doggie companion, Manny, who died in August 2019.  And, because he was an avid football fan, we have to add: “Go, Steelers!”

Everyone who knew Richard will remember him as a very intelligent, kind, open-minded, gentleman who adored his wife, Patti, and his children and grandchildren.

He is survived by Patti and their 4 daughters, as well as 6 grandchildren, Sierra Skeens, Catharine, Clinton, and Conor Clancy, TJ and Clara Fisher; eight sisters: Donna Baker, Darla Bednar, Kathy Lawrence, Karen Nicholson, Patty Vensel, Sharon Lawrence, Carole Blaschek and Sherry Sherrin, all of Ohio; and sons-in-law Tabor Fisher, Bradley Skeens, and Daniel Conley  He was predeceased by his parents, and one sister, Adele Blackburn and a sister-in-law in February 2020, Nancy Hadcock Mayle.

Our family is very grateful for the loving care offered in these last weeks by Jewish Geriatric Services and Spectrum Hospice.  Memorials may be sent to Methodist Theological School (for the Scholarship Fund), 3081 Columbus Turnpike, Delaware, OH 43015 or to Spectrum Home Health and Hospice, 770 Converse St., Longmeadow, MA 01106.  A service of remembrance will be held at the convenience of the family when we can again gather safely.  The Lawrence family’s care has been placed in the trust of Mohawk Valley Funerals and Cremations, 7507 State Route 5 (between Little Falls and St. Johnsville), 315-508-5131.  To offer a note of condolence to the family, please visit www.mohawkvalleyfunerals.com.