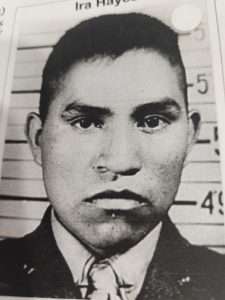 No way in hell I would have enlisted. Go fight for a country that had broken the treaty guaranteeing access to the sparkling waters flowing through ditches in the Phoenix Valley-water essential for the growing of crops-subsequently dooming his people to lifetimes of hopelessness and despair, the specter of hunger ever-present? Go fight for a country that forced him to attend a school, Phoenix Indian School, where every effort was made to transform him into a “red white man” at the expense of his native language and culture? Why fight for a country whose media, especially movies, most often depicted Native Americans as a bunch of inhumane savages in order to make them look like they deserved to have their lands stolen from them-that the breaking of over 300 treaties was justified. Despite it all, Ira Hamilton Hayes, Pima Indian, enrolled member of the Gila River Indian Community located in Pinal and Maricopa counties in Arizona, enlisted in the Marine Corps Reserve on August 26, 1941. “I always wanted to be a Marine.” He was 18 and following in the footsteps of his father, subsistence farmer Joseph, a World War I veteran.

The first Pima in history to receive his paratrooper wings (code name Chief Falling Cloud), Hayes and his fellow Marines of the 3rd Parachute Battalion saw action in December of 1943 in Bougainville in the Pacific. In September of ’44, he was transferred to the 5th Marine Division and on February 19, 1945, he stepped onto the southern beach near Mt. Suribachi, Iwo Jima, and into history.

On February 23rd, 1945, Chief Falling Cloud was one of six Marines who raised the Battalion flag on top of Suribachi, an indication that the mountain was secured. The scene was immortalized by Associated Press combat photographer Joe Rosenthal and became an icon of the world war. I have to believe that most readers over the age of 45 are familiar with the photo. Pvt. Hayes was the last Marine on the left, his arm reaching up to grab the flag. Ira continued in combat until the entire island was secured on March 26th. His Easy Company was hit hard, Hayes being one of five Marines of an original platoon of 45 who survived. When he mustered out on 12/1/45, he left with a chest full of medals, including the Navy and Marine Corps Commendation Medal with combat “V,” Navy Presidential Unit Citation with silver star, and Greater-Pacific Campaign Medal with four bronze campaign stars.

After Iwo, he ultimately returned to the states where he and his fellow flag-raisers, thanks to Rosenthal’s photograph, became symbols of America’s impending victory and leaders of the Seventh War Loan bond-selling tour, which ultimately raised over $26 billion to help defray costs of the war. Back on the rez, at first, he was quite the sensation. Ira even made the big screen, appearing as himself with John Wayne in Sands of Iwo Jima. He was later featured in William Huie’s book, The Outsider, which became a movie in 1961 with Tony Curtis starring as Hayes. 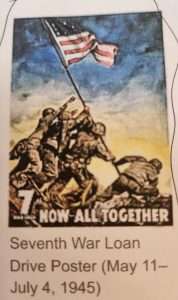 But glory’s fame can often be fleeting as Ira was about to discover. Described by his niece Sara Bernal as “a very quiet man who’d go days without saying anything unless you spoke to him,” he was never comfortable with his unwanted fame and suffered from a serious bout of Post Traumatic Stress Disorder. As he once said:” I was sick. I guess I was about to crack up thinking about all my good buddies. They were better men than me, and they’re not coming back. Much less to the White House, like me.” If the Veterans Administration wasn’t prepared to deal with the post-war problems of my Vietnam combat veteran friends after their return in the 60s and ’70s, imagine what it was like for a Pima Indian back on a worthless plot of reservation land in rural Arizona in the late 1940s.

And like many ‘Nam vets, he found the easiest way to dull the interminable pain was through the bottle. Efforts to hold a steady job were undermined by demon rum with predictable results-he was arrested 52 times for public intoxication. During a rare period of sobriety, he attended the Marine Corps War Memorial dedication on November 10, 1954. He met President Dwight Eisenhower who praised him as a hero. A reporter there asked Hayes, “How do you like the pomp and circumstance?” He hung his head and answered, “I don’t.”

Sadly, or depending on how you may look at it, blessedly, his hell on earth ended on January 24th, 1955, twelve days after his 32nd birthday. He might be best epitomized by these lyrics in Johnny Cash’s “The Ballad of Ira Hayes”- He died drunk one mornin’-Alone in the land he fought to save-Two inches of water in a lonely ditch-Was a grave for Ira Hayes.

World War II killed Chief Fallen Clouds-only it took over 10 years to do it. For his service to his country, Ira Hayes and so many other Native Americans like him, including 28 Medal of Honor winners (e.g. Woodrow Wilson Keeble), deserved so much more than they received. I have to believe that Ira would have gladly exchanged his medals for help for his PTSD and alcoholism, for improved conditions on the rez and for a truthful depiction of Native Americans in our high school American History textbooks. I’ll finish with the last stanza of The Ballad.

Yeah, call him drunken Ira Hayes
But his land is just as dry
And his ghost is lying thirsty
In the ditch where Ira died

*Note: Check out Cash’s “The Ballad of Ira Hayes.” On January 23rd, Ira would have been a hundred years old.