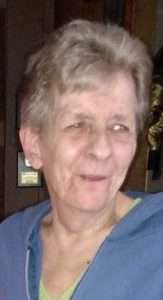 Audrey E. Stowell, 78, of Dolgeville, New York (Town of Oppenheim), passed away unexpectedly on Wednesday, November 16, 2022, at her home.

She was born on March 22, 1944, in Gloversville, New York, and was the daughter of the late Harmon and Madeline Nayome (Praetorius) McCann. Audrey received her schooling from Johnstown High School.

Audrey was employed by Daniel Green Shoe until their permanent closure and then worked at Kass and Kell for several years. She then went on to work for Helmont Mills in St. Johnsville, New York for several until her retirement in 2006.

She enjoyed crossword puzzles and watching tv. Her favorite time was visiting with her family and friends. She will be dearly missed by them.

In keeping with family wishes, there will be no funeral services. A private family interment will be held in Brown Cemetery in Oppenheim, New York. The family is being cared for by Miller-Plonka Funeral Home, 30 Wolf Street, Dolgeville, New York.

To leave a message for the Stowell Family, please visit www.millerplonkafuneralhome.com and sign the tribute wall.